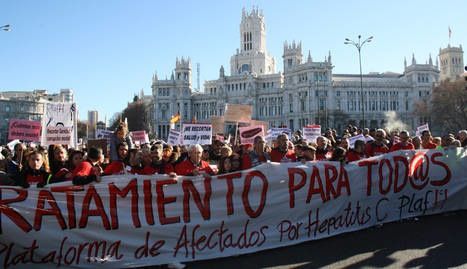 In one of the the largest public health marches in Europe in decades thousands of hepatitis C patients and citizens marched through the streets of Madrid last Saturday to demand “treatments for all”. http://www.cuartopoder.es/invitados/2015/01/10/en-directo-marcha-moncloa-en-apoyo-de-los-afectados-por-la-hepatitis-c/4171 The protest was organized byLa Plataforma de Afectados por la Hepatitis C (PLAFH) * and was supported by dozens of NGOs, trade-unions and by opposition political parties from the center and the left. Throughout the demonstration civil society and political representatives expressed harsh criticism of both the Spanish Government and the pharmaceutical industry. The cut-backs in the Government´s public health spending and the abusive prices of the industry were the main targets of the crowd´s chanting.

In Spain there are an estimated 700 thousand people infected by Hepatitis C while around one-third of them have been diagnosed. Approximately 50 thousand patients are in the advanced stages of the illness. Many of these patients cannot be safely treated with existing treatments due to complications and/or their genotype.

Sovaldi, the first of a new generation of more effective and safer Hepatitis C drugs was approved for purchase by the Spanish Government last summer with the promise of very high rates of curation, lower secondary effects and easier dosification. In most cases Sovaldi needs to be combined with at least one other medication. The Spanish authorities decided to earmark 125 million euros for the purchase of Sovaldi at a price of 25 thousand euros per three month treatment. This would mean the treatment of only approximately five thousand patients in 2015. Health authorities issued a very restrictive clinical protocol for rationing Sovaldi prescriptions only to patients in the most critical condition.

Patient associations rejected the official recommendations as unfair while Spanish hepatologists and other doctors around Spain labelled the rationing criteria as “unprofessional and anti-scientific”. http://www.diariomedico.com/2014/12/19/area-profesional/sanidad/hepatologos-critican-duramente-ministerio-hepatitis-c A week before Christmas Day dozens of Hepatitis C patients started a 24 hour sit-in at on the Madrid´s largest hospitals that has continued to date. The patients´ hospital protest and the whole support movement has attracted daily media coverage including top TV coverage over the past month.

At first the patient platform only criticized the Government for the cut-backs and demanded to increase drug purchases of Sovaldi up to 800 million euros. But soon the public debate and patient demands started to include the abusive prices of a pharmaceutical model based on patent monopolies. Due to widespread traditional and digital media coverage, the rage of Spanish public opinion ignited when it learned that the cost of producing Sovaldi was only around 100 euros and that Gilead was making fabulous profits thanks not to their own research but to a speculative buy-out of the patent. Citizens groups such as Salud por Derecho, No Gracias and the TransAtlantic Consumer Dialogue, among others, have helped stimulate this public discussion on the high price of many drugs, the IPR system and the possible solutions. http://blogs.elpais.com/3500-millones/2014/07/los-enfermos-de-hepatitis-estan-por-encima-de-las-patentes.html

A few weeks ago the spokeperson of the Hepatitis C patients platform, Mario Cortés, started to also criticize the pharmaceutical company Gilead and to demand a compulsory license as permitted by the WTO´s Doha Agreement to produce Sovaldi as a generic. http://es.euronews.com/teletipos/2867244-los-enfermos-piden-800-millones-al-gobierno-para-tratar-la-hepatitis-c/ He also began to include in his high-profile public statements the high cost of many cancer drug and other treatments that are being rationed in Spain. The centrist party Unión Progreso y Democracia was the first political group to suggest the use of the flexibilities in international law to produce a generic version of Sovaldi. A week ago the new rising star in the Spanish political scene, Podemos, demanded that the Government “expropriate” the patent and produce an affordable treatment. The left party Izquierda Unida even demanded in the Spanish Parliament an official challenge to the patent monopoly over Gilead through the issuing of a compulsory license. The Socialist Party has not questioned the patent but, instead has requested 200 million euros more in the budget. The opposition parties also contrast the billions in public money spent on bailing out Spanish Banks with the inability of the State providing the best treatment for the ill. Hepatitis treatment has become a hot political issue in Spain today.

The Government has named a Commission of national and international experts to write a strategic plan to combat Hepatitis C. It is headed by a long-time advisor of the pharmaceutical industry who has already advanced that patients with the “early stages of fibrosis” would not be eligible for treatment with the new drugs and “would have to wait”.

A few months ago the European Parliament plenary session debated the issue of the high price of life-saving medicines, specially Hepatitis C ( http://tacd-ip.org/archives/1211 ). In response to written questions the European Commission has insisted that medicine prices are a national competence as well as the decision on emission of compulsory licenses to bring out a generic product in case of a public health need. . The Commission added that it would have to review the health justification of reverting to a compulsory license to produce a Generic. While EU member states are party to the Doha Declaration on public health flexibilities of intellectual property rights which allow compulsory licensing, they are forbidden from importing generic versions from outside the EU of drugs that are under patent in the EU. A French initiative to drive down prices by means of joint public procurement of many EU States has not prospered due to the lack of price transparency and weak political will. At the same time a European plan for differentiated pricing (tiered pricing) among EU states is being supported by the pharmaceutical industry and some patient groups (In fact, prices already differ between EU countries). In general, the European Commission is not showing leadership on this issue and it has continued to be a steadfast defender of rigid EU IPR rules on pharmaceuticals both within EU legislation and in trade negotiations underway, such as those for the transAtlantic TTIP agreement with the US.

In Spain, the fight for affordable treatment of Hepatitis C will probably become a campaign issue in the regional and national elections that will take place in May and November, respectively.

An expensive, market-oriented pharmaceutical model that has clearly failed to provide access to life-saving medicines for the majority of the population of the Global South is now also not working for millions of European citizens. One might say that “the chickens have come home to roost” as we are now facing the dire consequences of our very own flawed model of biomedical innovation and marketing.

H
Happy New Year 2019
11/12/2018 22:21
Happy New Year 2019
Répondre
R
Rapid results keto
27/07/2018 08:50
While we examine a few beneficial facts that point experience wonderful due to the fact that we are finding that was given it. So shared with my pal with at the side of college students can get project writing help through leading company "entire venture help".
Répondre