NO MID-EAST PEACE WITHOUT GREATER US AND EU PRESSURE

The Bar-Illan speech:
Obama, the EU and Netanyahu´s stationary bicycle

Under the present situation the EU should maintain its de facto postponement of its upgrading of EU-Israel relations and should condition the future deepening of economic, commercial and scientific participation of Israel in EU programmes to a progressive compliance with EU policy aims concerning peace and human rights.  A change in Israeli policy toward the humanitarian blockade of Gaza and toward settlements in the West Bank could facilitate the desired upgrading process.

U. S. President Obama has set out policy goals concerning the Palestinian-Israeli conflict to be solved by a viable two- state solution and has exerted a certain degree of pressure on Israel with regards to the expansion of settlements on occupied Palestinian land. A firmer commitment by the US toward Mid-East peace has sent signals that many years of a "blank cheque" policy toward Israel has ended. It is also possible that Obama´s first gestures of change in the US Mid-East policy might already be weakening the gospel and reducing the support of some of the region´s Islamic fundamentalists.

Most importantly we should not be deceived by "word games" when the only reliable political statements in the Middle East are made by the reality on the ground.   One should realize that the Israeli Government and probably the majority of present Israeli public opinion believe that no peace deal with the Palestinians is possible, that it is too dangerous or that it is not even desirable.  Peace and normalization with the Arab world is yearned for in Israel by the present  Israeli administration abstractly but radically rejected in any concrete terms that would be remotely acceptable to any moderate Palestinian or Arab leadership.   Only US and EU political pressure can break this stalemate and prevent even more suffering on all sides. 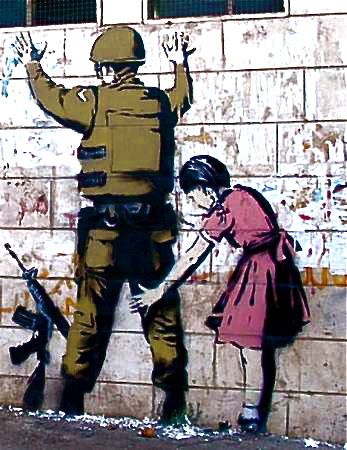 Prime Minister Netanyahu´s  response to Obama has been to make rhetorical overtures but no real political concessions.  On the contrary, he has conceded the theoretical acceptance of  "a Palestinian state", something Israeli governments have accepted for almost 20 years,   but he has framed this acceptance of the "two-states" within a series of uncompromising conditions that render any positive negotiations with the Palestinian Authority impossible. His semantic pedaling tries to give the impression he is moving in the right direction but his bicycle does not budge one inch from very hard-line conditions concerning the core issues of the conflict:

Settlements:  Netanyahu refused to freeze the "natural growth" of settlements which has been the pretext of the massive expansion of thousands of homes over the last 15 years. He has not even committed himself to a serious policy concerning dozens of "illegal outposts" , a few of which are torn down only to be rebuilt a few days later.   No clear limits or borders are placed on the growth of the existing large settlement blocks such as Gush Etzion or Maale Adumim. This prejudges and cripples the outcome of any future negotiations leading to the establishment of even a mini Palestinian state. Netanyahu never even mentions what the present or future borders of Israel are or should be, while the whole Arab world is at least clear about demanding the pre-1967 borders.

Jerusalem:    While Olmert  already started to talk about the division of Jerusalem and the acceptance of the "Clinton Parameters" (Arab neigbourhoods would be part of the Palestinian State and Jewish ones part of Israel), Netanyahu in his recent speech insists on Jerusalem as the "undivided and eternal capital of Israel".   Israeli policy of the annexation of East Jerusalem has provoked great criticism from both the EU and the US.   The Palestinian population of the city is increasingly being marginalised, surrounded by settlements and cut off from the West Bank.  It should be clear to all that Jerusalem is at the centre of the Arab-Israeli conflict and that no agreement is possible  without a division o sharing of the city.

"Jewish State":   A relatively new condition raised by the Israeli side for the establishment of a Palestinian State is the recognition by the Palestinian not only of Israel (that was recognised by Fatah and the PA over 15 years ago) but of the "Jewish nature" of the State.   This new demand has a double intention. On one hand it aims at preventing any discussion even symbolic of the "right of return" to Israel (though the borders of Israel are never defined!) or compensation for Palestinians who lost their homes in 1948. On the other hand it could be used as a pretext for discrimination or  expulsion from Israel of Israel´s large Arab minority.  It should be noted that at this time the Knesset is considering a number of laws on "loyalty to the State" and that Foreign Minister Lieberman advocates racist measures toward Arab citizens and the transferring  of Arab-Israeli population and land to the Palestinian Authority. Much of the Israeli right considers the Arab minority a dangerous "fifth column" that threatens the nature and existence of the "Jewish State". Security:  Despite the fact that security and anti-terrorism measures taken by the PA police, with the support of US and the EU,  have been universally recognised, even by Israel, Netanyahu makes new and contradictory demands on the Palestinians. On one hand he demands as a pre-condition for a Palestinian state complete demilitarisation and on the other hand he requests that the PA "defeats" Hamas and "recovers"  Gaza (something Israel has not manage with all its military might). When Netanyahu demagogically implies that any future Palestinian State could become "Hamastan" with missiles falling on central Israel he ignores the fact that any peace agreement would include very strong International security guarantees (possibly by NATO). The present conflict with Gaza is also the result of a unilateral and non-negotiated withdrawal of Israel in 2005 without any political agreement with the PA nor security guarantees from the international community.     To state as is often done in Israel "we withdraw, they shoot missiles" is a gross simplicity and a misrepresentation.  What one cannot expect the Palestinians to accept  as a pre-condition for negotiations is their total security dependence on Israel. No independent state could accept this demand.

Hamas: As far as Hamas goes, it is clear to all that only important political concessions on the part of Israel with the PA and a great improvement of Palestinian daily life can strengthen the position of Palestinian moderates vis a vis Hamas.  The present  stalemate and the blockade of Gaza along with the lack of any form of  dialogue with Hamas only favours extremism and despair. Only the end of the siege and real hope for Gaza can erode popular support for Hamas.

Iran, the nuclear threat and the "commonality of interest":  Netanyahu also speaks of a "commonality of interest" between Israel and the Arab world in order to face the "existential threat" of Iran´s nuclear programme that should place other issue on the back burner. Nevertheless, without clear progress on the Palestinian issue there will be little chance of forming a common front against Iran. Even strong U.S. support in confronting Iran is more difficult without   movement toward peace. The double-standard of Netanyahu´s argument on Iran is also often pointed out in the Arab world. It is common knowledge that Israel possesses a nuclear arsenal of its own.  Indeed, strong pressure on Iran will be needed, especially in the context of the present democratic resistance, but it will not be in line with Netanyahu´s simple dichotomy of "either we bomb them, or they will have the bomb".